Using a real photograph from 1948, we wrote stories about what it must have been like to be bought by a stranger. 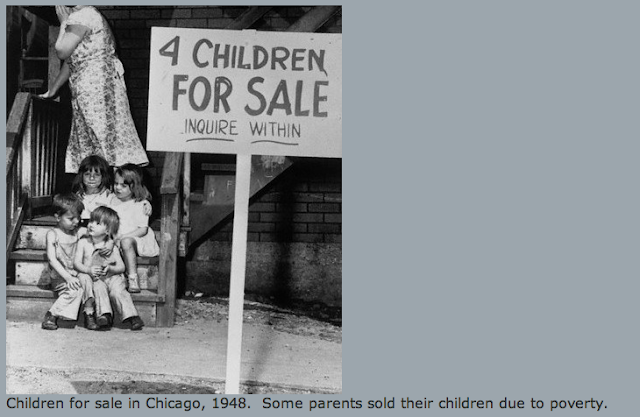 Once upon a time, on the steps of a rundown house in Chicago, sat four children, four small children, who mother was selling them to pay the family bills. A white sign lay posted into the ground, with words neatly written in black ink. The words read, CHILDREN FOR SALE. INQUIRE WITHIN. Four children sat silently on the step of the house, their eyes lowered to the ground in solemn sadness. Their mother, hands raised to her face in despair, looked down at the children who looked up at her with false hope.

When the children looked away, the mother leant onto the wall, a crumbling concrete mess. The mother looked into the distance. Over there, she thought, is a place where lives are happier. A place where no one sells their children. That is the place where I should be.

She couldn’t bear to let her children go but she had to let them go, needed the money for the rest of the family to survive. She promised herself she wouldn’t miss them and maybe, with time she would forget about them. But she knew she wouldn’t. She would remember these children always. How she loved them. How she took care of them. How she gave them away to be slaves.

A man approached the house. They children looked up at him in silent despair, knowing their time was soon going to be up.  For once in their life, they wished to be thought of as horrible little children, which no one would want to buy. Their pleading eye did nothing to help them. The man took no notice of them as he walked up the steps and approached their mother. He needed people to work for free. Their mother reluctantly took one last looked at her children and then looked away as the man lead them down the street to their new life.

There they were, 4 little children, sitting there on the dusty steps, not knowing what was happening to them.  A sign had been placed in front of them, but they couldn’t tell what it said. People that passed by, looked at them, but kept on walking. Two boys and two girls, crying while their mother is wailing hysterically behind them. They sat there for hours and hours, wondering why they were sitting on the steps with a sign sitting in front of them. They didn’t even know that the sign said “4 children 4 sale, inquire within.”

The next day a strange man walked up to them and started talking to their mother who was busy tidying around. They talked for a while then soon shook hands. The man then left. The mother came and sat down by the kids, hugged them, kissed them, then left crying. After an hour had been the same man came back in a carriage, he nodded at the kids mother, then put the four scared kids into the carriage. As soon as the mother and the man had exchanged the money, they were off. The kids sat huddled in a corner, crying and drooling all over each other.